Google Word Coach: Everything You Need To Know 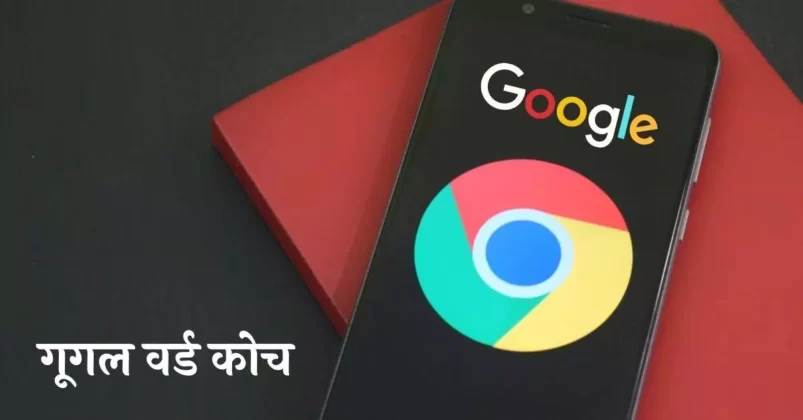 This blog focuses on introducing you to the game and answering some common questions revolving around this game. Read this blog till the end to gain an extensive sense of the game. 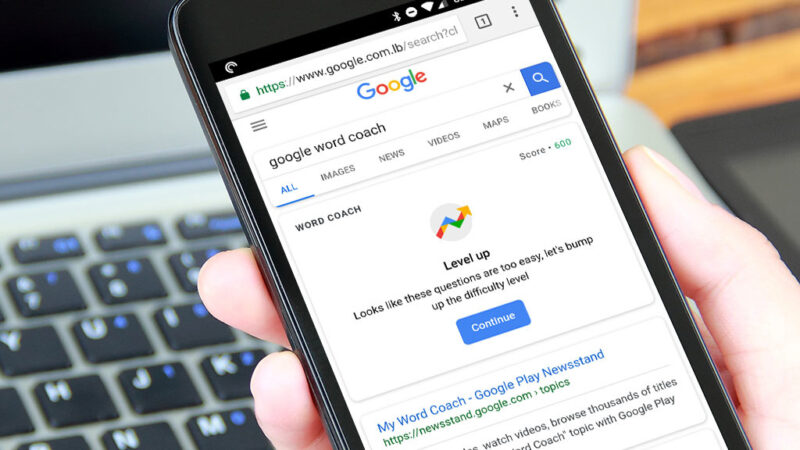 Google Word Coach is a quiz game designed to help expand English-language vocabulary in a fun and engaging way. गूगल वर्ड कोच appears under our google dictionary and translate boxes or when someone searches for “Google Word Coach” or “Word Coach“. गूगल वर्ड कोच launched this month for non-English speaking countries and also for India. Also, It will come to other countries and languages in the future.

Google Word Coach is an exciting game introduced by Google as a way to enhance someone’s English vocabulary. For someone from a Non-English background, they may find it hard to converse in English which is why this game can prove to be beneficial for them. With a game-like setup, the Google Word Coach game (गूगल वर्ड कोच) is an interactive, and easy way for someone to learn English.

Google Vocabulary game also becomes visible when you search for a word on Google. It’s usually added below Google dictionary and translate boxes while viewing from a mobile. Simply, typing “word coach” can also make the Google word game visible.

The game is built in a quiz-like format and the Word Coach game is available in other languages as well. Thus, a person can learn English in a stress-free environment with this game.

When Was The Google Word Coach Game Launched?

Google Word Coach was launched in February of 2018. Countries such as the USA don’t have this feature enabled as they have English as their mother tongue. Non-English speaking nations such as India do have this feature as someone from these nations is more likely to search for meanings and synonyms and hence, the game can prove to be beneficial for such individuals.

Google has been pretty enthusiastic about this game/feature. One of the spokespeople for Google on the launch of the game stated: 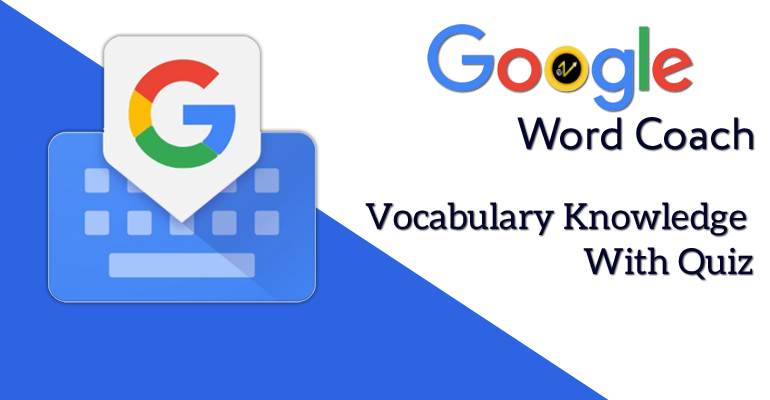 “Google Word Coach is a game designed by Google to help and expand English Language and Vocabulary in a Fun and Engaging Way. This new game is in Quiz form, Which appears below the Dictionary and language Translate Boxes of Google or When someone Search for “Google Word Coach” or “Word Coach” on Google. It launched in Feb 2018 in Non-English Speaking Countries. It will help people to expand their English Language Vocab in a fun way. Right Now It has been launched in India but in the future, it may come to other countries and in different languages also”.

What are the Benefits Of Google Word Coach Game?

Google Vocabulary Game has a ton of benefits some of which are described below: 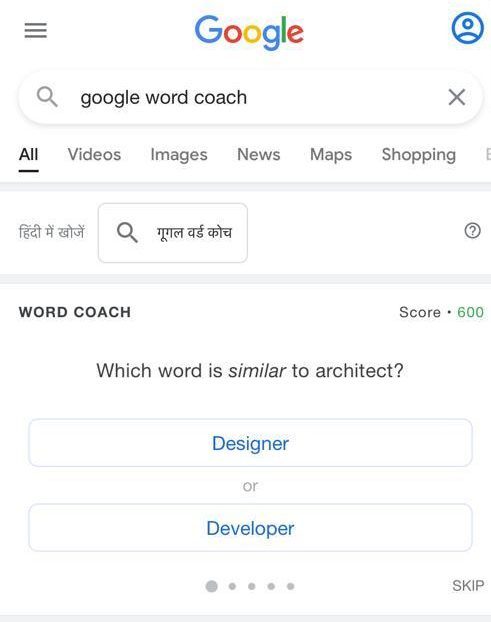 There are mainly two ways to access the Google Word Coach game:

Thus, it’s easy to access the fun, enjoyable, and educative game. Not just non-English speakers but even the ones who understand English well can play this game as a means to enhance their English language skills.

You can even email or share the scores of the game on your social media profile such as Facebook, and WhatsApp by clicking on the Share button. All score is lost once the browser is closed.

How To Play Google Vocabulary Game?

Keep in mind the game cannot be downloaded from an app store. It’s only available in Non English speaking countries and it opens up only on the browser.

Here is some additional information that you must know while playing Word Coach Game:

Keep in mind the vocabulary words would still appear in English. Hence, you can build your English vocabulary in your language.

There are mainly 3 types of questions that are available in the Google Word Coach Game. These questions are:

The game starts easy but as the levels go up so does the complexity of the questions. The image questions are the easiest to answer in the Google Vocabulary game.

Each round of the game consists of 5 questions and two options are provided for each question. You can also skip the game by tapping on the Skip option if you don’t have the answer to any question.

How Many Levels Are There In The Google Vocabulary Game?

The Google Word Game consists of two levels. After some initial rounds, you should see a level button. Clicking on it, you’ll enter the 2nd level which has no endpoint. After this, you can play for as long as you want. 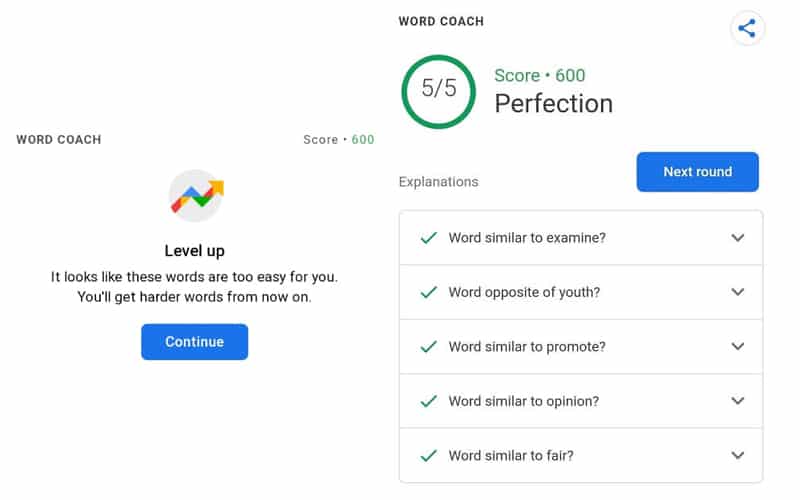 After answering the 5 questions in round 1 of the Word Coach Game, you’ll enter the next round. The more the level, the harder the questions will get. If you successfully manage to give the right answer, you win around 200 points. These scoring points are usually decided by the level and difficulty. Moreover, keep these things in mind for the point system of the Word Coach Google:

After finishing some rounds of the game, you should see a message or a sign arrow for adding a shortcut on your mobile screen. Thus, the game becomes visible on the phone home screen with this shortcut. At the bottom left while playing this game, a mark will be visible. Tap on it and an icon of the game will appear which you can place anywhere on your phone screen.

Thus, the shortcut icon is not disabled and rather becomes visible if you play the game from your phone browser window.

The highest score in Word Coach Google has been 600360 achieved by Anshul Gawande. If you wish to share your score you can do so by sharing your score on social media platforms under the hashtags:

Periodically, the record gets checked and updated, and accordingly, the highest score keeps on changing. You can also mention your score in the comments section.

Q. Is it possible to download the Google Word Coach game?

Ans: No, it’s a browser-only game and cannot be downloaded.

Q. How can I exit the game?

Ans: You can quit the game by simply exiting the browser.

Q. Will my score remain saved after I’ve quit the game?

Ans: You need to log in with your Gmail id and then play the game in one go. That’ll be your score. Once you quit your browser, the score won’t remain saved.

Q. Why is the Google Word Coach game popular?

Ans: Google Word Coach is an interactive, fun game to play that helps a non-English speaker learn the language easily. The game is enjoyable allowing the user to learn a language. A person can gain a skill in an interesting manner that’s far from being tedious which is why the game is popular.

Q. Does the game enhance the vocabulary of an individual?

Ans: Yes, since the game is based on levels and it has no fixed end, an individual can learn a ton of new words and improve their vocabulary. Moreover, the scoring system motivates an individual to learn and play the game even more.

Q. Can a beginner play this game?

Ans: Absolutely! No proficiency is required whatsoever. From beginner to intermediate to advanced, all levels of English speakers can play this game, have fun, and learn a word or two.

Q. How can I get better at the Google Word Coach game?

Ans: You get better with practice. Google Word coach game is no exception and the more you play, and practice, the better you get at it. The more correct answers you provide, the higher the score.

Google Word Game is an exciting way to get better at English introduced by Google. People with varied proficiency can enjoy the Google Word Coach game (गूगल वर्ड कोच). It’s convenient to access this game as it’s available on the mobile browser. The game has ample resources and examples and is a great initiative by Google to enhance English skills amongst individuals from non-English speaking countries. One can now enjoy and enhance their English proficiency with this game.

Google Ad Rank and The Proven Ways To Improve It...