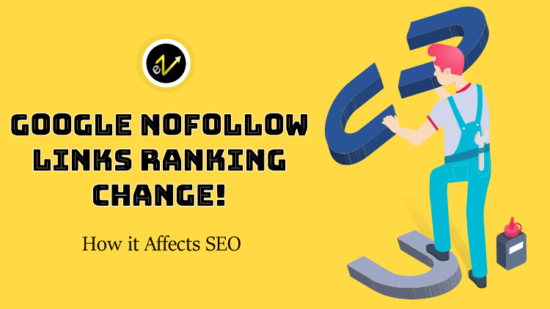 A major change was recently announced by Google about how they are counting the nofollow links. These links were earlier treated like a directive which meant that the nofollow was obeyed by Google period. However, starting today when it comes to ranking purposes the nofollow is now going to be treated like a hint rather than an order. This simply means that now Google can decide if they are going to use that specific link for ranking or not.

The first thing that you need to know is exactly what nofollow is and how it is used. It is used on links and it is an attribute from HTML which would tell Google which links are trusted and which ones aren’t. Originally it was designed in order to combat the spam comments on blogs. However, it later evolved to be used for advertising links and for links that were generated by users which couldn’t be trusted 100%.

The official statement and announcement from Google on this change are as follows:

“When nofollow was introduced, Google would not count any link marked this way as a signal to use within our search algorithms. This has now changed. All the link attributes — sponsored, UGC and nofollow — are treated as hints about which links to consider or exclude within Search. We’ll use these hints — along with other signals — as a way to better understand how to appropriately analyze and use links within our systems.”

What Do Publishers Get?

One might question what the publishers are going to get with these new attributes for nofollow. However, there are numerous reasons that you might not want to add these new link attributes. Alan Bleiweiss, who is a forensic SEO auditing consultant had this to stay about the changes:

“There’s ZERO incentive to adopt the new nofollow changes. If it has a direct, significant impact on rankings, sure. Forced change. Except Google claims is not going to. The cost of revamping entire CMS’s & training teams to accommodate this, outweighs the motive.”

When Alan started to talk about these changes he pointed out a few important items, including that publishers aren’t getting any incentive to use these new link related attributes. Also, the publishers aren’t going to see any benefit in terms of seeing a boost in ranking and that any changes being implemented outweighs the perceived benefits.

AimClear’s VP for Content Strategy Mark Traphagen has commented on just how the search marketing community is attempting to understand all of the changes. He stated, “Because Google not only redefined how it uses nofollow but also added two new link attributes (sponsored and UGC), I can understand confusion among SEOs about what needs to be done if anything. “

Julie Joyce, who founded Link Fish Media and is an expert in link building, had brought up a viewpoint that is interesting. The change that Google is making has opened up the possibility that some websites can now get link equity along with a deserved boost in rank. Cyrus Shepard was also asked about his opinion and he stated, “I think this is good news for link builders, and the link graph overall, but a potential headache for publishers. Even though most links still won’t “count”, this won’t stop folks from rushing to create comments, UGC(user-generated content), and Wikipedia edits with the hope that they might count, no matter how slim the possibility. Rumors and misinformation will abound. Folks are already confused. Good for Google for doing this, but the industry is going to need more clarification before this thing shakes out.”

When HTTPS came into play Google had forced HTTPS to be adopted through demotion of the sites that didn’t put this into play and giving boosts in rank to those who did. Danny Sullivan, who is the SearchLiaison for Google took to Twitter where he said that Google isn’t going to force anyone to implement these new attributes.

“The two new attributes are voluntary choices for those who find it useful to be more granular. It’s a *choice* and we don’t need to put “teeth” into a choice. Use them. Don’t. It’s a choice.” 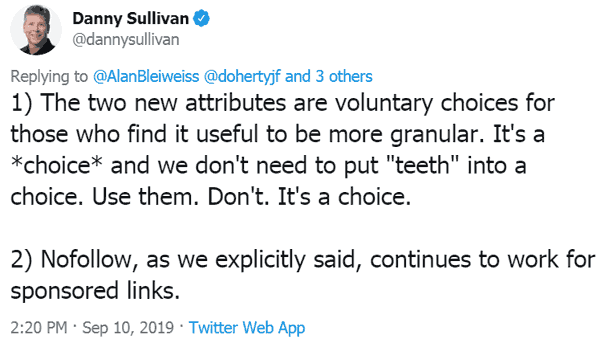 What Does Google Get?

“I guess a “sponsor” link more directly expresses why the link might not pass authority than “nofollow.” …It seems clear that “nofollow” was being used for too many diverse purposes.”

Why UGC Links Would Be Trusted by Google

Google stated that the UGC (User Generated Content) nofollow links are going to be treated as if they were hints from September 10, 2019. They said,

“All the link attributes, sponsored, UGC (User Generated Content) and nofollow, now work today as hints for us to incorporate for ranking purposes.”

This attribute would let Google know that these links could be useful when it comes to ranking purposes. This would come across in the numerous forums that are available online that Google can determine on their own.

Why Google Changed it to a Hint?

There are many people who are saying that there aren’t as many opportunities for building links because nobody is creating them. This is because

How is Google Going to Use the Nofollow Links from Wikipedia?

The links from Wikipedia are considered to be high value and in general, they are thought to be high quality because of the tight standards for editing. Adding the links from the site into the ranking calculations done by Google could bring in a new method to improve the signal of the links, which could trickle down and increase the link calculations.
When speaking about Wikipedia links Andrea Volpni from Wordlift stated, “Most of today’s NLP/NLU (Natural Language Processing/Natural Language Understanding) is based on models trained on Wikipedia, links included. Some of the NLP we use is also dependent on links found in Wikipedia’s article. The value of these links is strategic. Here is an example of how Wikipedia links can be used to extract knowledge patterns, Encyclopedic Knowledge Patterns from Wikipedia Links.”

Bill Slawski, who is the Go Fish Digital SEO research director was asked about Google Using the links from Wikipedia for purposes of ranking. He stated,

“I hope not. They already do well enough. It wouldn’t be good seeing them spammed more.”

The announcement by Google has changed how the links are going to be calculated for ranking purposes. This is making the process fairer since the links that were no-followed arbitrarily might now be able to count. However, this change could also increase the amount of link spam. This is also going to be an opportunity for more SEO companies to sell the nofollow links.

People Also Search For – A Brilliant Way To Gain...