How To Protect Your Business From Zero Day Attack? 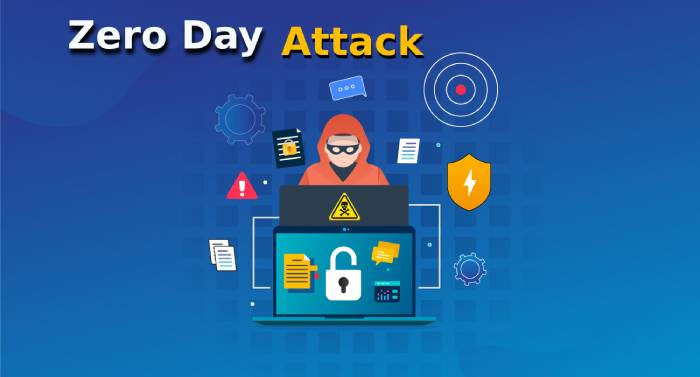 Cyber-attacks have become increasingly worrisome for businesses of all types. In recent, cyber-attacks have increased exponentially. Hackers can steal data, money, and even intellectual properties critical for any business. A data breach, on average, can cost a small business from 120,000$ to $1.24 million.

Thus, it’s incredibly essential to be aware of such attacks and how to protect your business from them. Business owners can find the information presented in this blog useful so that if they face any zero-day threat, they are better prepared.

What is Zero Day?

A zero-day (also known as a 0-day) is cyber attack targeting a software vulnerability which is unknown to the software vendor or to antivirus vendors. Until the vulnerability is mitigated, hackers can exploit it to adversely affect programs, data, additional computers or a network. An exploit taking advantage of a zero-day is called a zero-day exploit, or zero-day attack.

Zero-day is a term used to that describes recently discovered security weaknesses that hackers use to attack systems. The reason why it’s referred to as zero-day is that the developer has zero days to fix the flaw that led to the hacking of the systems. Before a developer gets a chance to fix it, the systems are attacked.

Often, people use the terms related to zero-day interchangeably. To clear the distinction, here is the definition of some of the common terms used:

Depending on the action to be carried out, different individuals can carry out a zero-day attack. These can be:

Who Are The Victims Of Zero Day Exploit?

Not only large corporations but even smaller businesses can also be a victim of a zero-day attack. Thus, a wide range of organizations can be affected by this, some of which are:

Any company will be targeted as long as it’s profitable. Take this fact: 43% of cyber attacks target small businesses. Moreover, hackers want to make the most money with the least amount of risk, therefore, any business can be at target and not just the big giants.

What are the Signs Of A Zero-Day Attack?

Certainly, there are specific signs and symptoms of a zero-day attack. It is essential to recognize these early on and take prompt action. However, the complex part is that every zero-day is unique. Though, there are some ways through which you can detect.

7 Way Of A Zero-Day Attack.

It is the actual process of scanning for zero-day vulnerabilities in the system. Once the issue is found, it should be instantly fixed. It can be a separate activity or a regular part of the development process. Sometimes this process is also outsourced to cyber security firms.

Machine learning algorithms are frequently adopted to establish a base safety line for systems. These algorithms use current and past interactions to establish safety measures for a system. The more data the algorithm receives, the more reliable it becomes.

Retro Hunting is the process of searching for reports of a major cyber attack and ensuring whether your company was affected by it or not. Follow these steps for effective retro hunting:

You can look for these signs on your website:

System users frequently interact with your system so they may spot problems before you. Therefore, regularly tracking user reports for suspicious emails, notifications about password attempts, or strange pop-ups is usually suggested to protect an organization from a zero-day attack.

A victim’s internet connection can suffer as a result of the attack. It’s easy to conclude that an attack has taken place when you witness a drastic drop in network speed. Though slow network speed doesn’t always indicate an attack, it’s a sign worth noting.

When a zero-day attack is implemented it can largely affect software performance, alter its functions, or even take certain features offline. This way it becomes natural for any business to identify a cyber attack.

How Do Zero Day Attacks Work?

Even though each zero-day is unique in its way, here are some of the standard steps that take place:

The next step that hackers implement is to penetrate systems once they have access to the network. Though there is no standard method, they commonly adapt these strategies:

With time, developers become aware of the attack and write a patch to fix the issue.  But the problem is security weaknesses are not discovered right away. It can take some days, weeks, or even months.

Most importantly, hackers can steal data with this attack and sell it online such as on the dark web. Multiple cyber security companies sell this data in black and grey markets. For large sums of money, data could be traded.

Finally, once the attack is discovered and patched, it no longer remains a zero-day attack, though, the damage it causes can vary.

How To Protect Yourself From A Zero Day Calamity?

A zero-day attack is extremely stressful as the only option is to wait for the developers to fix the issue. The best attack is preparation. To prevent a zero-day attack, you can take the following steps.

8 Steps to Protect Against Zero-day Exploits.

Outdated code creates a way for hackers to penetrate. Thus, it becomes essential for an organization to update software and applications. New updates are necessary as they:

Professionals working in an organization should have limited access to data, hardware, and software. Only the applications to which they perform regular tasks should they be given access. This way, hackers have few ways to gain access to systems.

Firewalls protect your system against any outside interference, or attacks. In functionality, firewalls provide an additional layer of protection to systems, shielding them from hacker attacks. In the market, there are many types of firewalls you can choose from such as packet filtering, web application, stateful, etc.

Security training can make your employees better equipped with handling security threats and help them easily identify social engineering techniques. Training employees for such situations can make them less anxious and allow them to take practical steps towards resolving the situation.

VPN provides virtual servers for safeguarding browsing data, connection data, and IP addresses. With less information available for hackers, they find it hard to breach your system. Thus, VPN also protects the system against zero-day attacks and other similar ones.

Here are Some Examples Of Zero-Day Attack

Every 39 seconds there is a cyber attack. Cyber attacks have become common, however, these are some of the notable attacks that have taken place.

In April of 2021, Google released an update for the chrome browser that also fixed a zero-day vulnerability exposed by a hacker. The vulnerability allowed someone to run code in a sandbox with the help of a crafted HTML page.

Specific government institutions in Eastern Europe were attacked and focused on local escalation privileges in Microsoft Windows. This allowed to run arbitrary code and install applications on non-protected systems. A patch was subsequently developed and the required code was implemented.

Individuals and organizations identified a zero-day vulnerability with Microsoft Word. In 2016, Ryan Hanson, a security researcher, and consultant, first identified this allowing an attacker to install malware on a system after the user downloaded a Word document.

Hackers exploited this vulnerability and stole millions from bank accounts before Microsoft developers patched it in 2017.

In 2020, Opatch, a cyber security company reported that an unknown individual has identified a zero-day vulnerability in Zoom. By convincing a user to click on a link or open malware, hackers were able to run code remotely in Zoom. However, this attack was only possible on Windows 7 or earlier versions. Opatch delivered this issue to Zoom and within a day a patch was built by Zoom developers.

Apple systems are highly lauded for their security. However, in 2020, iOS faced two zero-day vulnerabilities that consisted of a zero-day attack that helped attackers gain access and compromise iPhones remotely.

Stuxnet was a computer worm that targeted multiple facilities in Iran. It infected Windows computers with the aid of USB sticks that consisted of malware. This malware then attacked machines by targeting their PLCs or Programmable Logic Controllers. With PLCs, automating machine processes becomes easy. Because of this, Stuxnet was able to penetrate security systems and target facilities in Iran.

Zero-day attacks are painful and can make any organization anxious, as it can take them by surprise. However, precaution is better than cure and when necessary, protection measures are adopted, zero-day attacks can be prevented. It’s essential to know the necessary signs of a zero-day attack as businesses of all sizes can be victims.

Zero-day attacks are cyber attacks done on businesses of all sizes that give them zero time to prepare. Developers have little to no time to fix the vulnerability in the system that’s exposed by a hacker. It can take some time depending on the complexity of the situation to come up with a patch.

Q. What expertise is required to prevent oneself from a zero-day attack?

Q. What to do when attacked by a zero-day?

Some of the common recovery methods are as follows:

Q. Should I start today to protect my business from zero-day attacks?

Yes, don’t think that you won’t be attacked. The hackers try to get maximum returns with minimum risk. Therefore, small businesses are also vulnerable to such attacks. From day one or as early as possible, you should protect your business from such attacks.

Q. How quickly can a business recover from a zero-day attack?

It depends on the complexity of the situation. Every software has some vulnerabilities. The best option is to protect your systems from such attacks. However, when attacked it depends on your team of developers how quickly can they release a patch. It can take a day, weeks, or even months to deliver a patch for the vulnerability.

Build A Robust App With These Cross Platform App F...